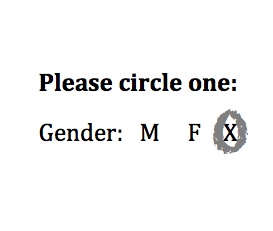 There’s no true definition for the word intersex; instead it’s a socially constructed category that is used to address those with ambiguous genitalia or those who have biological variations which cause their reproductive organs to function in untypical male (XY) or female (XX) ways.  If you’re curious about the prevalence, according to Wikipedia and the Intersex Society of North America, anywhere from 1 to 1.7% of children born are intersex.  What does that mean for the child’s birth certificate?  The gender on the birth certificate is usually left up to the discretion of the doctor or the parents.  Sadly, the truth is that intersex children were traditionally (and still are in many countries) forced to claim one of two labels: Boy or Girl.

Fortunately some countries are implementing a new option that allows people to think outside of the gender binary.  Australia took the lead on July 1st, 2013 when gender options recognized by the government included M (Male), F (Female), and X (Indeterminate/Intersex/Unspecified).  On November 1st, 2013 Germany will follow Australia’s gender nondiscriminatory lead.  Parents in Germany will have the option to leave the gender section of the birth certificate blank, denoting that the child’s gender is “indeterminate.”  Children will be allowed to change their gender later in life, if they wish to identify as male or female.

Historically, intersex individuals had a gender forced upon them.  Some were even surgically altered so their genitalia would appear gender specific.  It’s wonderful to think that children will now have the option to get comfortable in their own bodies and identify as they wish.  Hopefully more countries will follow, enhancing gender equality for those who identify as M, F, and X.